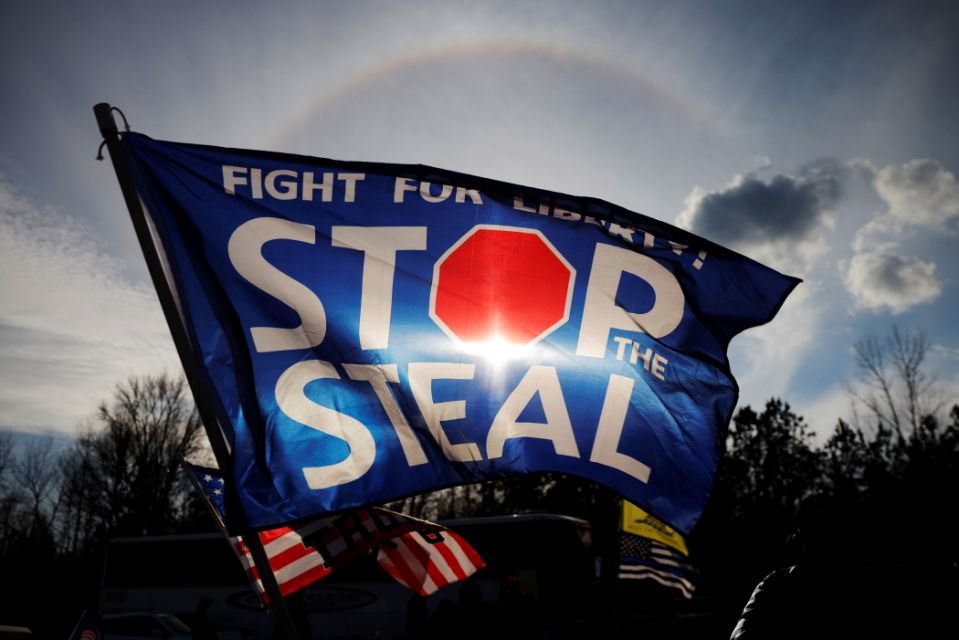 Events preceding and ensuing from the 2020 election have serious implications for information fluency. Claims of a stolen election before it happened and supported ever since by politicians and pundits have been taken to heart by millions of people. Was the violence that erupted on January 6 during the counting of Electoral College votes justified? Was there enough evidence to justify breaching the capitol? Or was misinformed rhetoric to blame?

What difference could information fluency have made?

On December 2, 2020 President Trump addressed the nation in what he said may be his most important speech:

"I am determined to protect our election system, which is now under coordinated assault and siege." [Source]

Citing an election that could not be conducted in a single day, his premise is that opportunities for fraud were multiplied by early voting and tabulating results that continued for days afterwards. States experienced a huge increase in early voting in response to the COVID pandemic. According to the U.S. Elections Project, over 100,000,000 people voted early, more than double the number who voted early in 2016 (47 million). It was a highly unusual year and many Americans responded by deciding to vote early, some to avoid crowds on election day and others to stand in early-voting lines--as more than one person said it, " I couldn't wait to cast my vote."

States enacted changes to their voting procedures to allow people to avoid crowds. Whether this was for health reasons or a systematic attempt for "assault and siege" (or both) is where opinions differ. In his speech, Trump builds his case for something other than public health reasons. He uses the word pandemic four times, each time connecting it to something Democrats are doing:

These four statements are but a small sample of claims made in the 46 minute speech. If events as described can be supported by evidence other than these words, especially if Democrats can be caught red-handed doing these things for these reasons, then there may be truth to them. If not, they are misinformation (fake news) or worse, malinformation known by the author to be a lie.

Trump popularized the use of 'fake news' by using the term around 2,000 times in the past four years. This umbrella term covers a lot of types of information, including known facts. Trump's use of the term, mainly aimed at news bureaus to discount the things they wrote, clouds the variations that can be found in news labeled as fake. There are intended and unintended mistakes which cover a wide range of intended and unintended lies and what can loosely be classified as dreams. Among this latter group are hopeful statements that can never be proven, generally the stuff of faith. To one person, they are undeniably true; to another they are delusions.

What is the appropriate label for information related to 'Stop the Steal'? Is it an intentional lie? Is it an unintentional mistake? Is it an unprovable conspiracy theory? It depends on who promotes the idea and why. Critical thinking comes into play in making such distinctions. In the context of Information Fluency, this takes the form of Investigative Searching.

Indispensable to the investigator's toolkit is fact checking. Investigative searching is within everyone's reach, but few do it. The consequences of not doing it now include charges of sedition for those who attacked the capitol based on information they consumed.

To demonstrate fact checking, take the substance of the last statement quoted in the speech above.

It is well-known that Nancy Pelosi is Speaker of the House. This could be fact checked, but it is a universally accepted fact. The title on her office door at the Capitol says "Speaker of the House." That is what others call her, including Republicans and Democrats. This is one of the things in the statement about which everyone agrees. It's a fact.

The rest of the statement invites study. Did Democrats attempt to mandate universal mail-in voting when Pelosi became speaker (or at any point)? This should be easy enough to check, since official statements are part of the public record.

Here are the top four Google results with comments added:

These four sources all associate Pelosi with an interest in mail-in voting, but they disagree about what she intended. The two Republican views echo the President in his belief that universal mail-in voting would benefit Democrats (presumably due to fraud). The non-partisan source supports her interest in promoting mail-in voting. The more left-leaning site says she has no power to make this happen since states decide how to conduct voting. Note that the investigation takes into account potential bias as information is collected.

According to public record, Nancy Pelosi has been Speaker of the House since Jan. 3, 2019 (she was also Speaker from 2007 to 2011). Was the first bill introduced when she was Speaker in 2019 about universal mail-in voting? So far, none of the results to the first query address this.

The top Google result is this from Congress.gov: Sponsor: Sen. Wyden, Ron [D-OR] (Introduced 01/03/2019). Vote by Mail Act of 2019. This proposed bill (S.26) requires states to allow voting in federal elections to be by mail without additional conditions or requirements, except a deadline for returning the ballot. States must mail ballots to individuals registered to vote in a federal election not later than two weeks before the election. The U.S. Postal Service must carry ballots mailed by a state expeditiously and free of postage. This bill authorizes automatic voter registration of individuals through state motor vehicle authorities.

By browsing related bills, one discovers the Vote by Mail Act of 2019 was introduced the same day in the House (H.R. 92 and H.R. 138). Over the course of the year other proposed bills to make voting easier starting in 2022 (mail-in, vote only from home, etc.) were also introduced. As of Jan. 2021, none of these bills have been passed; all have been referred to committees. So while Democrats did introduce bills to make voting in federal elections by mail equitable across the country (since some states allow this while 28 others do not), they have not yet been successful in making it a law.

Nonetheless, Trump's statement is accurate regarding bills for universal mail-in voting being introduced the first day Nancy Pelosi resumed her role as Speaker of the House. Public records support the claim that Democrats sought to nationalize vote by mail. But they never became law.

To verify Trump's claim that Democrats also sought to eliminate voter ID requires reading the text of the bill. Here is the relevant section from H.R. 92:

"If an individual in a State is eligible to cast a vote in an election for Federal office, the State may not impose any additional conditions or requirements on the eligibility of the individual to cast the vote in such election by mail, except to the extent that the State imposes a deadline for requesting the ballot and related voting materials from the appropriate State or local election official and for returning the ballot to the appropriate State or local election official."

The phrase to pay attention to is "eligible to cast a vote." Nothing is said specifically here about checking voter ID. It certainly may not by concluded that the bill intends to abolish ID verification, otherwise it would have to say it. One of the findings stated earlier in the bill opposes the idea of eliminating voter verification:

The signature verification process, the tracking system for each ballot, and postal service cooperation in preventing ballots from being delivered to names not recognized as receiving mail at an address nearly eliminate the potential for fraud in vote-by-mail elections. Evidence of undue influence or voter coercion after vote-by-mail implementation in Oregon has been nonexistent to minimal.

As it stands, it's not just Oregon that requires verification of voter ID, known as "safeguards."

This from FactCheck.org: "There are ‘safeguards’: Trump wrongly claimed there were “no safeguards” used by states to check the identity of voters."

This article has examined only one claim pulled from a 46 minute speech. Other fact checking services such as FactCheck.org have written about the speech more comprehensively. What this investigation has found is that Trump made a statement containing both accurate and inaccurate information. The accurate part can be described as who, what and when and is easily verified. The 'why' is left as an unverified assumption. The omission qualifies as misinformation, but what kind?

Unable to 'read' Trump's mind, it is impossible to say whether he intended to include inaccurate information in his statement and why. But it is there in video and print. Unless he admits to a deliberate lie, or not knowing all the facts, or professes a desire to prevent people from voting (voter suppression), the best we can say is he promoted a dream. There is no evidence to back it up. And since there is evidence to prove it didn't happen, it is a lie whether intended or not.

The reader is left with a few questions for self-examination:

More in this Issue

Test your investigative skills looking for evidence to support or refute an age-old conspiracy theory that the earth is actually hollow. | Go

Take this six item quiz to determine how well you can fact check news without bias. | Go